It’s finally time! I can finally tell you more about the KickStarter project I hinted to in a previous post. And if you’ve been following along on Instagram or Facebook you probably saw some sneak peeks at materials that will be used, too. But you’re about to learn more about the new pen series than I’ve shared anywhere else…

It started out while designing a new fountain pen. I still can’t get into all of the specifics (well I could, but we need to keep a little mystery in our relationship here- for now), but I LOVED how the piece was going to look with the material I originally had in mind (more on that in future posts, I promise!). And I started to wonder what other materials could I use?

Ultimately I decided to create 6 different pens, each one featuring a different gemstone. I had been following the work of a talented local jeweler, aym collections, and had seen a piece of her work that triggered this initial idea. So after a meeting at my shop to explain what I had in mind she agreed to work with me (Yay!!!) on this project. She is sourcing and working the gemstones before giving them to me for the pens I’m making.

Like I said, there were 6 pens I planned to make. But the gems take 6 weeks (that is not a typo) to arrive at her studio. In the meantime I really wanted to be able to make a prototype pen and be able to test out this idea. Not that I think it won’t work, but more to see if there are any design changes that need to be made. But the only stone she had on-hand that matched the specs of the stones we would be using was Garnet.

She prepared the stone and I found some beautiful red material to pair it with. Honestly…as soon as I saw the material I chose alongside the Garnet I knew this had to be added to the GemPen collection! And so, now there will be seven pens 🙂

The Garnet pen is waiting on 1 more part to arrive before I begin construction. Meanwhile, the gemstones for the other 6 pens are being procured and I will reveal another gemstone being used each Sunday. As you’ve probably guessed, today’s reveal was Garnet. So without further ado here are pictures of the 7 material options along with a shot of the Garnet. 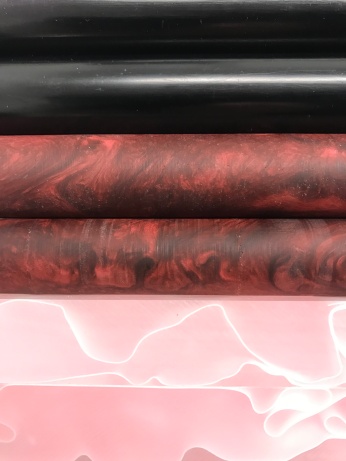 As always thanks for reading another entry from the GW Pens back room!

View all posts by GW Pens